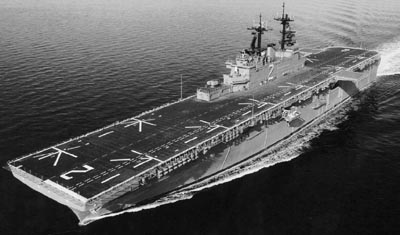 The USS WASP (LHD-1) class ships are just entering the fleet, with a total of 6 planned in total at this time.  They are the largest amphibious type ships in any navy, and when the WASP was moved sideways to launching dock, it was the largest object ever moved over land.  These ships resemble straight deck aircraft carriers with a very large island structure and a large gate in the stern that opens up to the spacious flooding well deck inside the ship.  The WASP class ships can operate up to 40 helicopters of all types or Harrier VSTOL jump jets.  This hull is complete up to the flight deck level and features the large bulbous bow, elevator wells, anchor bolsters shaft exits and strut locations molded in, a detailed set of plans can also be purchased with this hull.

Package Price $ 1401.00 Contact us for details of contents, this is not a complete kit to make the model and does not include flight deck and other fittings.

Special Shipping: This hull is too large to be shipped by FEDEX Ground, and must be transported via common carrier, such as an airline. The shipping charges must be prepaid by the customer. Shipping charges will vary according to the distance from Long Beach, CA , and the package will need to be picked up at a larger, jet served airport. These hulls can be shipped to your business or residence via Fedex Air, this can cost a few hundred dollars additional.

Note: This hull can be shipped via Fedex Ground Service if we remove the sponson on the stern of this hull, the modeler will have to re-attach this when you build the model.

These ships are the newest class of LPD's (Landing Personnel Dock) the navy will operate during this century.  Construction of these ships has begun.  They were completely designed by computer and eventually replace all the older LPD type ships currently operated by US Navy.  This hull has the forward protruding bulbous bow and the shaft and strut locations molded in, and comes with a set of plans.

Special Shipping: This hull can be shipped via FEDEX Ground Service as in OS-3 size package. Shipping and handling in the USA 48 states is $ 175.00.. 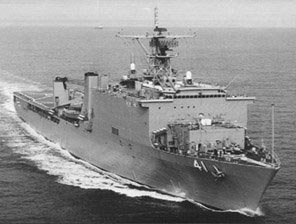 The WHlDBEY lSLAND class LSD's were built to replace the aging THOMASTON (LSD-28) class (Landing Ship Dock) . These new ships are the largest units of their type built and are designed to accommodate 3 LCAC's (Landing Craft Air Cushion) or several other types of landing craft or vehicles. They can also operate several helicopters although no hanger facilities are provided for. There are eight ships in this class that are in commission with an additional four ships built as a cargo variant on the same hull. These ships are the first US Navy combatants to be powered by medium speed diesels and can attain 22 knots. Our hull for the LSD41 features the large protruding bulbous bow, anchor bolsters and the shaft exits and strut & rudder. Package price $ 739.00

Special Shipping: This hull can be shipped via FEDEX Ground Service as in OS-2 size package. Shipping and handling in the USA 48 states is $ 110.00. This was the standard landing ship tank (LST) used by the United States and allied navies during World War Two. These ships were used to deliver troops, tanks and other fighting vehicles to the beaches in almost every amphibious assault or landing in WW II, Korea and Vietnam. Some of these ships were converted into mini helicopter landing bases, hospital ships and PBR support vessels for the riverine forces during the Vietnam war. This hull comes with d a set of arrangement plans.

Package price $ 345.00- please contact us for details of contents.

These fast transports were converted from Destroyer Escorts as the need to transport troops to the landing beaches with more speed to avoid air attack including the growing threat of Kamikazes in the Central Pacific.  Most of these ships were converted from the Rudderrow DE-224 class hulls.  The end of the war found many of these conversions unfinished and most of these were scrapped while others served into the 1980's.  This hull comes with plans.

APD-42 SET: Includes the hull, plans and cast brass and polymer fittings, as listed in the catalog. Contact us for details of the set.  Price $ 302.00

Status update - this hull is nearly complete and is expected to be available later this year.

Our larger scale LST-542 is for the modeler who wishes to stage his own miniature beach assault.  This hull is large enough to  have plenty of working features, such as a opening bow doors and an operating ramp to send your miniature tanks out to do battle - none of these are included, however, assembling your invasion army will be your problem!  1/48 scale armor and figures have been made by a number of manufacturers, notably Bandai and Tamiya, and a bit of hunting around should enable you to find what you need.  This hull has the side rubbing strakes / hull stiffeners molded in as well as the locations for the shaft exits and strut penetrations.  A set of arrangement plans is also included.